“TAKE ME ALONG” ROBIN GOH SINGS THE LEGENDARY CHARLES AZNAVOUR 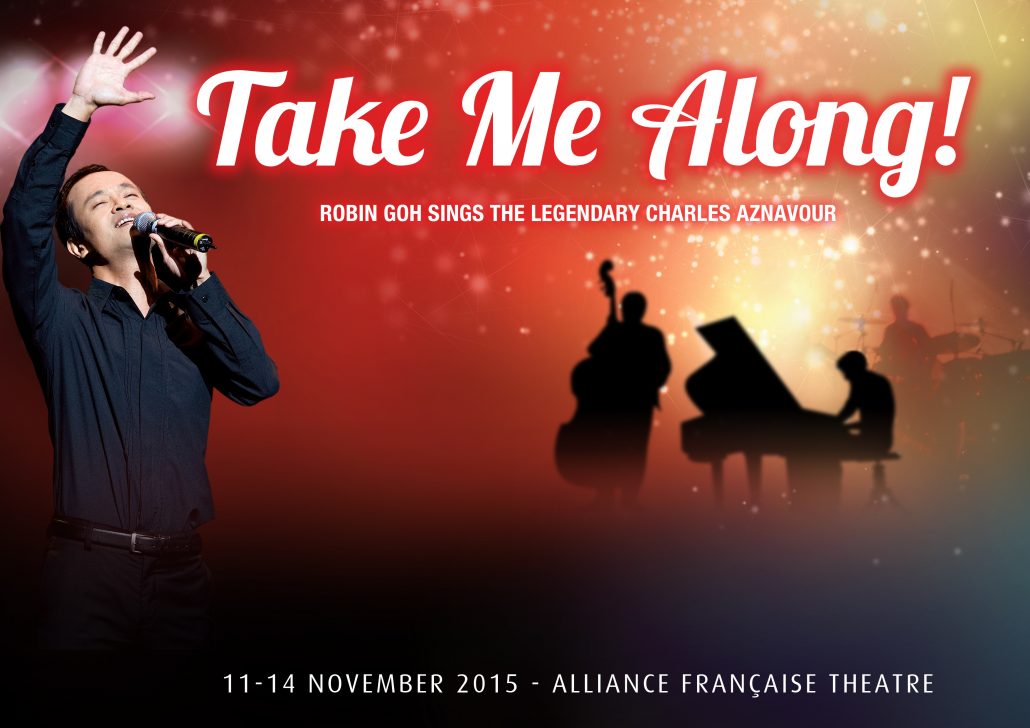 Join the charismatic Robin Goh for 4 magical evenings as he showcases the music of the legendary master of French Chanson, Charles Aznavour, for the first time ever in Singapore!

From November 11 – 14, for an intimate, acoustic concert showcasing Goh’s authentic and moving renditions of his favourite ballads and uptempo songs by France’s most famous singer.

Brought to you by Sing’theatre, who captivated audiences with the wonderful concert “La Vie en Rose” this past spring, “Take me along” is sure to be an unforgettable introduction to the music of Aznavour for Singaporeans.

“As a French national, I think Aznavour is one of our most beautiful living treasures and I can’t wait to share his phenomenal music with a Singaporean audience,” says Sing’theatre founder Nathalie Ribette.

Aznavour’s boldly original and honest love songs paired with his unique tenor voice have captivated audiences around the world for over 70 years. His songs deal with the pains and pleasures of love, from joyous pieces like “Take me Along” to the darker “How Sad Venice Is” and the romantic “She.” He’s been covered in English by international legends such as Elvis Presley, Elvis Costello, Ray Charles and one of Goh’s favourites, Liza Minnelli. A segment of the concert will feature songs that were recorded by Minnelli including “What Makes a Man a Man” which Goh was fortunate enough to see Minnelli perform live in New York.

“It was spellbinding,” says Goh, “the layers were just incredible. She always respected his songs when she was singing them, but she was always able to put her own unique spin on them.”

Aznavour’s collaborations with other international superstars, including an album of duets featuring Celine Dion, Sting, Elton John and Josh Groban (over 50 years his junior!), speaks to the universal and timeless appeal of his music, that reaches across generations.

“His songs, I think, are popular because of their universal quality, despite or maybe because of the fact that he wrote about experiences that he himself went through,” says Goh. “That’s when the humanity shines through.”

Aznavour’s fame wasn’t instant. He paid his dues in small cabarets and watering holes struggling to get top billing in top tier establishments. Like Aznavour, Goh has also struggled and overcome obstacles to get to be the wonderful success that he is today. Both performers stories are proof that with perseverance and determination life has endless possibilities!

Explore the possibilities this November with Robin Goh, singing in English and French, backed by a four piece acoustic band, under the direction of Nathalie Ribette and the musical direction of Joel Nah.

“Take me Along” will run from November 11 to November 14. Tickets available now at SISTIC